Department of Computing students achieved the runner-up spot in a national enterprise and employability competition. 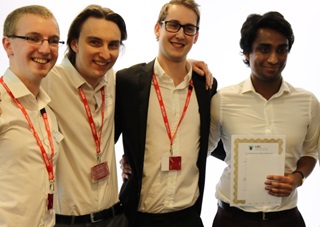 The Universities Business Challenge Worldwide is the world’s longest-established and leading undergraduate simulation-based competition designed to develop employability and enterprise skills. Each year 300 teams take part in a competition to determine the best entrepreneurial team in the UK.

Students from the country's leading universities progress through three stages of competition, which take place throughout the academic year. Starting in October, the teams go through a group stage, a semi-final held at Bristol University, and then the final itself, held in March at IBM’s UK HQ.

The College of Business, Technology and Engineering place great emphasis on applied learning, and the competition is a great example of that. When giving students the opportunity to use the skills they have learned during their study outside the classroom they often excel, according to Enterprise tutor Dr Andy Hirst: “The Business and ICT team were exceptional, romping their way to the final by winning all the heats by a large margin.”

The competition is a great way to develop softer skills such as teamwork, problem solving and decision making, that complement the students' course. “The pressure of competition and time limited activities really makes you work harder. It feels more real than typical coursework assignments,” said Zayne Fulat, in the final year of her Business and ICT course.

"To just be in the final was an outstanding achievement," added Stephen Barry, also in his final year of Business and ICT. "To beat both teams from the University of Sheffield was great!”

In the past ten years, teams from the Business and Enterprise course have won the competition, finished runners up and appeared in five semi-finals. Andy Hirst said, “As the only course representing Hallam, it’s great to see so much business success from these computing students”.

Deborah Caldwell, managing director at UBC said, “I was delighted that the Sheffield Hallam team were this year’s runner-up in the IBM UBC. What a great performance!”