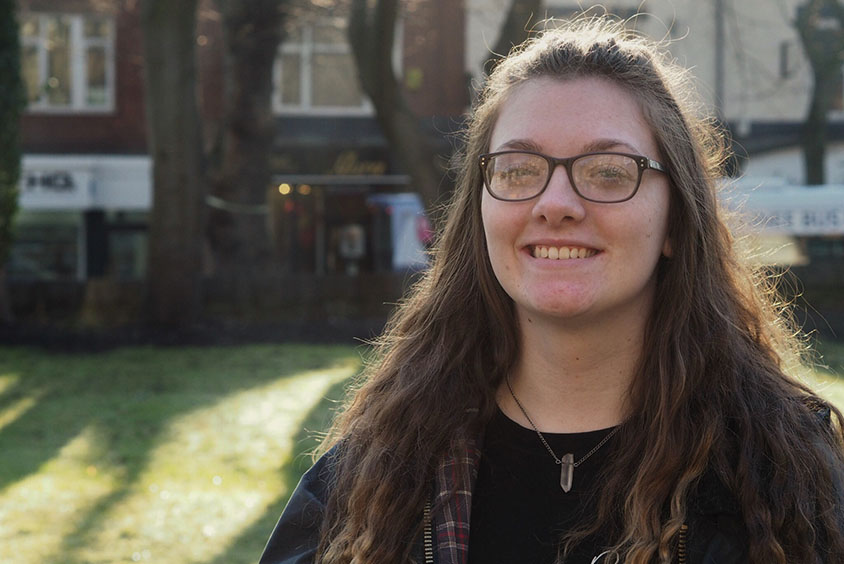 Autumn Beard is in her second year studying adult nursing at Sheffield Hallam University. Autumn's stepfather has been diagnosed with mental health problems and her sister has a chromosome disorder. Autumn has cared for them since she was 10 years old.

'Each morning I would make everyone breakfast, get my sister washed and dressed and ready for college. When I lived at home me and my mum worked as a tag team which worked well, so we could have some time to ourselves every now and again.

'Now I'm at university, I'm on call 24/7. I have to emotionally support my stepdad every day, constantly on the phone and texting to make sure he's okay.

'After my mum I'm the primary carer, so if anything happens to her I'd have to drop everything and go home and probably quit the course. That's always in the back of my mind.'

Going to university didn’t seem feasible for Autumn initially. But with support from her college, she started looking and saw that Sheffield Hallam University offers support to people who have caring responsibilities, such as mentoring, tailored financial advice and bursaries.

'I think financial support is incredibly important for any young carer thinking about going to university, as it's often the worry of student fees and living costs which put people off. Financial support can show potential students that there is help available to them, giving them hope that university is a viable option.'

Autumn's high course costs mean that she still struggles financially: 'I don’t think I would have done nursing if it wasn’t for the NHS bursary which I received. I get £457 a month but after rent that doesn't leave much. Now that the NHS bursaries are being cut I'm worried, as I and so many other student nurses are struggling financially already.

'I start my work placement next month and I'm worried as it might not be in Sheffield. If it's in Barnsley it's going to cost me around £30 a week, if not more, to get there and back five days a week.

'Most student carers have disabled parents so it's not a simple case of being able to borrow some money from them.

'I work at the University as a student carers ambassador and as health care assistant in a mental health facility to help me with everyday costs.'

Research has shown that students with caring responsibilities are four times more likely to drop out of university. This is something that Autumn has considered on numerous occasions: 'I've been so close to dropping out so many times! In first year I lived in halls and everyone was just into partying. I hadn't done any of that before uni, because I was busy caring, so I would just sit alone in my room. It would scare me that people were still up until 4am. Around that time I was thinking that maybe this isn't right for me, but I stuck it out.'

'There are times when I think I'm in the moment, but it feels like there's something there stopping me from fully enjoying myself. I don't always know at the time that that's what it is, but it's there - it's hard to describe.'

The prospect of extra funding for student carers would give Autumn the peace of mind to focus on her studies: 'I think funding for student carers is important as it can alleviate some of the pressure of being a student and a carer. You never know what's going to happen. For all I know something could happen to my mum and I'd have to drop everything, but having some money to set aside for my travel costs would give me some reassurance.'