From humble beginnings in fledgling colleges to our position as one of the UK’s largest and most progressive universities, this is our story. 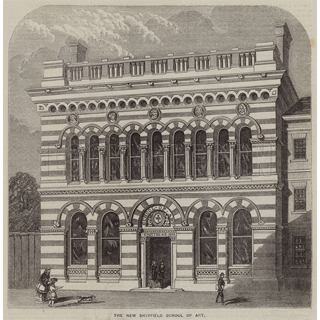 We can trace our roots right back to 1843, when the Sheffield School of Design was founded to provide skilled designers to support Britain's industry.

In the early days we were a somewhat smaller institution. Lessons were given in the Bath Saloon, a rented room above the baths on Glossop Road, which is now home to a pub. Lessons had an average attendance of 32 people. We later moved into the purpose-built Sheffield School of Art on Arundel Street.

Our students sweep the board at the Great Exhibition

By the 1850s we had grown to around 1,000 students and changed our name to Sheffield School of Art.

At the Great Exhibition in London, we were the most successful art and design school in the country, with Sheffield students winning four gold medals - no other school won any.

We educate Sheffield's men and women 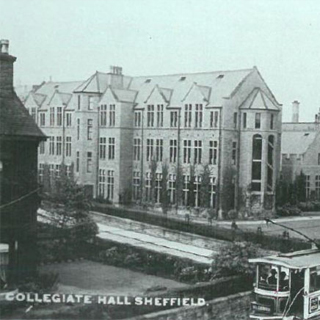 Sheffield City Training College officially opened on 13 October, based at Collegiate Campus. 132 students enrolled. Unlike other colleges around at the time, the college admitted both men and women - although they were not taught in the same classes or lecture theatres until the 1930s. In 1966 it was renamed the Sheffield City College of Education.

A sporting tradition is launched 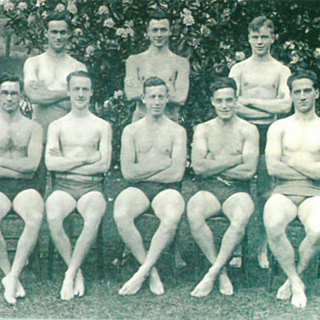 A forerunner to today's Varsity tournament, the first sports day at Sheffield City Training College was held in June and held regularly thereafter. This picture shows the swimming team. 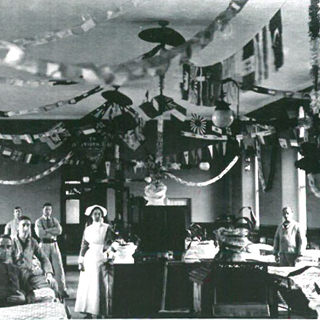 Sheffield City Training college was requisitioned during World War one as part of the 3rd Northern Base Hospital. The hospital at Collegiate provided 400 beds, through which passed a total of 64,555 sick and wounded men. 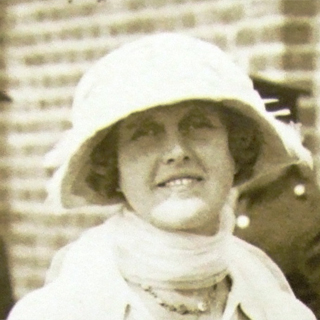 When former school student Annie Bindon Carter volunteered at the Wharncliffe War Hospital she started a company helping men who had been severely disabled produce painted fabrics, which were sold around the country. One of the earliest examples of art therapy, the business employed almost 70 ex-servicemen. During the night of the Sheffield Blitz on 12 December 1940, the upper floors of the old house in the centre of Collegiate Hall were occupied by 10 men taking turns on duty as fire watchers. Bombs fell on some of the shops on Ecclesall Road opposite, and one student, Harry Daniels was killed by the collapse of a tea merchant's shop as he helped to fight the fires.

Collegiate Hall was made uninhabitable by bombing. There are a number of holes and dents in Collegiate Hall wall along Ecclesall Road which are reputed to have been caused by shrapnel during the blitz.

34 current and former students were killed in action and are commemorated with a plaque now in the Collegiate learning centre.

We join together under a Wing 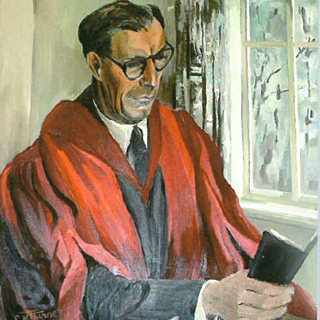 Under Principal Dr Herbert Wing (1949-65) the Sheffield City Training College began functioning as one rather than two separate colleges for men and women. Principal Wing encouraged students to have a greater representation in the running of their College. The Sheffield College of Technology was established on Bowling Green Street. Many students split their time between the classroom and the local steelworks, and later used their skills to help rebuild Britain after the devastation of the war.

The Sheffield School of Art moves to Psalter Lane

After many buildings were all but destroyed by bombing during the Second World War, the Sheffield School of Art moved to the former Bluecoat School, on Psalter Lane, where it would remain for over 60 years. Psalter Lane was home to the renowned student hang-out 'Wham Bar'. 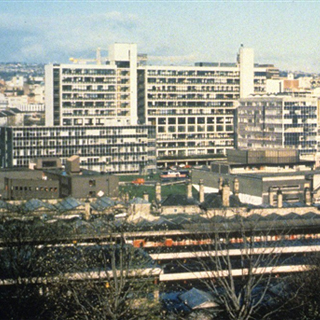 Sheffield Polytechnic - one of the first three polytechnics - was established. Early areas of study included design, science and building.

The main sites were Pond Street and Psalter Lane. Sir Eric Mensforth became the first Chairman of Governors. Today the Eric Mensforth Building is situated at City Campus and is home to science, technology, engineering and maths subjects. Bill Owen took over from Eric Mensforth as Chairman of Governors until 1989. He was an active trade unionist and became Lord Mayor in 1980. He persuaded the council on a free vote to bar circuses featuring live animal acts from Sheffield's parks. He also led campaigns to oppose hare coursing and testing on animals.

We're a key player in the Sheffield music scene 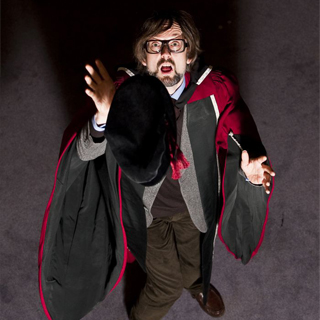 Sheffield School of Art student Jarvis Cocker hands a demo tape by his band Pulp to DJ John Peel, who invites them to do a session on Radio 1. It would be at least another decade, however, before the band reached national prominence.

Around the same time our refectory also hosted the first gigs by the Human League and ABC, two bands who enjoyed more immediate success. The Phoenix Building, which was home to Sheffield City Polytechnic's Students' Union, was renamed as the Nelson Mandela Building in 1982, to honour the anti-apartheid campaigner. 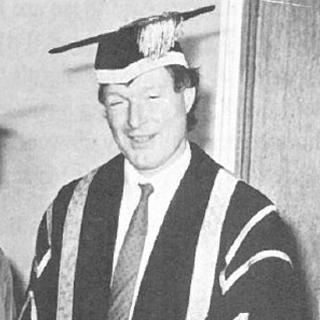 John Stoddart was appointed as Principal of Sheffield City Polytechnic. In the ten years after his appointment, the Polytechnic continued to grow, and he steered it through its transition to Sheffield Hallam University in 1992. He is honoured today in the name of the Stoddart Building, home to Sheffield Business School.

We begin training the next generation of nurses

We started training South Yorkshire's nurses and midwives in 2006. We're now one of the largest providers of nursing and midwifery education in the UK. 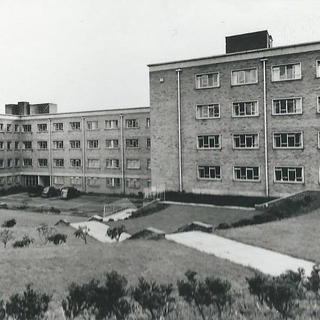 Nick Park wins the first of his four Oscars

Former student, Nick Park, wins the first of his four Oscars for Britain's best-loved characters, Wallace and Gromit. In 1991, in recognition of his success, we awarded him an honorary fellowship.

We become a university

In 1992 Sheffield City Polytechnic became Sheffield Hallam University and was given authority, along with other new universities, to award its own degrees.

The Queen opens the atrium

The atrium at City Campus was officially opened by HRM the Queen in February 1994. At the time it was the largest ever construction project in higher education - costing £27m - and it went on to win a prestigious award from the Royal Institute of British Architecture.

We open a major new library on City Campus 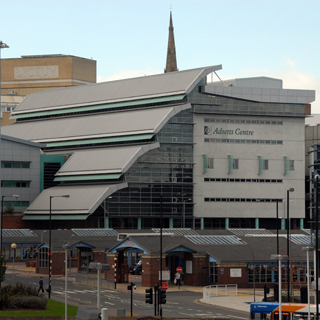 The Adsetts Learning Centre was opened. The building was named in honour of Sir Norman Adsetts OBE, the University's chair of the board of governors between 1993 and 1999, to recognise his personal contributions and outstanding work to raise funds to build the new centralised University library.

The business school is on the move

The Sheffield Business School moved out of both Totley Hall and Dyson House and relocated to the Stoddart Building. 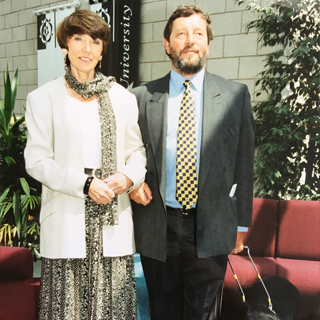 Diana Green is appointed Vice- Chancellor of Sheffield Hallam University. During her time in post, she gave an incredible amount of weight to research and its real world impact.

Diana was also committed to widening participation in education and opening up doors for non-traditional students such as mature students, people who want to study part-time and others who want to continue to develop professionally.

Fertility expert and broadcaster Professor the Lord Winston became our second Chancellor in a ceremony at Sheffield's Millennium Galleries on 5 October 2001. The Robert Winston Building - dedicated to our healthcare courses - was opened in 2005.

We launch a partnership with Microsoft

Sheffield Hallam University celebrates its 10th anniversary by becoming the first University in the UK to partner with Microsoft ltd and achieve Microsoft Qualifications Partner status. Over 1,000 staff attended a celebration event across three University venues.

Our Students' Union moves into the HUBS 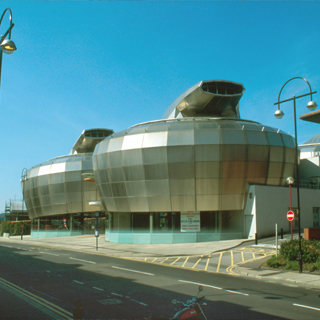 In September 2003 the former National Centre for Popular Music was taken over by Sheffield Hallam Students' Union to become the HUBS. Designed by Nigel Coates Architects, the HUBS divided opinion when they opened. The four steel kettles were voted the world's ugliest building by a 2011 poll. 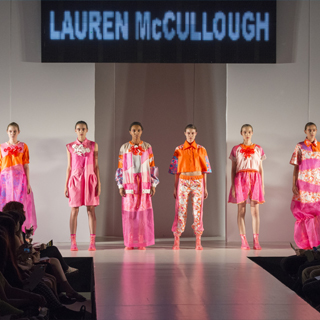 The Sheffield Institute of Art held its first major art and design degree show in 2006. Since then the annual event has become one of the biggest student exhibitions in the north, showcasing outstanding work by our talented artists, makers, designers, photographers and filmmakers.

The show regularly attracts the attention of leading national figures in the creative industries, as well as art lovers from across the region.

Originally called the Furnival Building and renamed in 2011, the Cantor Building broke new ground for the University's estate due to its innovative design. The Cantor Building was renamed in recognition of a major donation from the H&L Cantor Trust, a name synonymous in the city with high quality design due their successful family furniture business which began trading in 1920. The Cantor Bursary now supports students to take up international work opportunities.

The University gained a special commendation award for the help and support we provided to over 600 people during the Sheffield flood of June that year. Stranded people and families were given dinner, a place to sleep, and breakfast the next morning.

We carry the Olympic torch 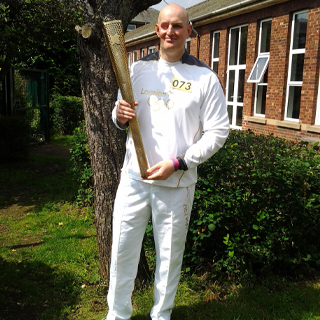 As part of the 2012 Olympics torch relay, three inspirational sporting champions from the University were selected to carry the Olympic torch when it came through Sheffield in June. Student Stephen Birkby, Hallam Union sports officer Colan Leung and head of Sport Services Dan Porter all took turns carrying the torch through the city, cheered on by thousands of people.

Our then Vice-Chancellor Professor Philip Jones cycled the second stage with the University's cycling club, Hallam Cycling. The money he raised was split between charities Marie Curie Cancer Care and the Sheffield Hallam Care Leaver's Fund.

In 2015 the Sheffield Institute of Education moved into the new Charles Street Building. It is connected to the Arundel Building by the Toast Rack bridge, designed by Sheffield Hallam honorary doctor Corin Mellor. The bridge makes reference to the area's industrial past and is located on the site of an old cutlery factory in which Corin's father, legendary designer David Mellor, once had a workshop.

Sir Bryan Nicholson was the University's first Chancellor from 1992 to 2001. In 2015, a University building was renamed after him. He said, ‘When you're a kid, you could never imagine a building being named after you. I still feel the same today. I thought how proud my parents would have been. They left school at 13 and, like many of my generation, I was the first person in my family to have a higher education.'

Sheffield Institute of Arts moves into the Head Post Office

In January 2016, our art and design students took up residence in the Grade II-listed Head Post Office building. Transformed into a stunning and unique new home it provides an inspirational space for students.

In the same year, Professor Chris Husbands was appointed Vice-Chancellor.

A new home for STEM is opened 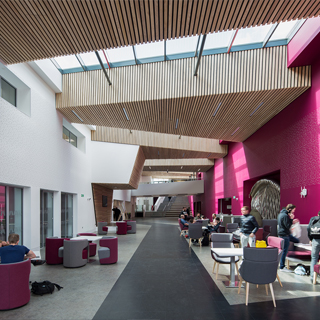 Sheffield Hallam University officially opened its new STEM Centre, a regional hub of excellence for science, technology, engineering and maths. It is named after Hertha Ayrton, an award-winning English engineer, mathematician, inventor and physicist in the nineteenth century.