I am an academic and practitioner specialising in Theatre Making, Applied Theatre, Actor Training, Theatre-in-the-Round, Early Modern Drama and Digital Pedagogy , Theatre and Phenomenology and Creative Industries Employability. I am an advocate for, and embed into my teaching, the methods and principles of practice-as-research and like to bring together my academic training with my professional experience as a director and applied theatre practitioner. 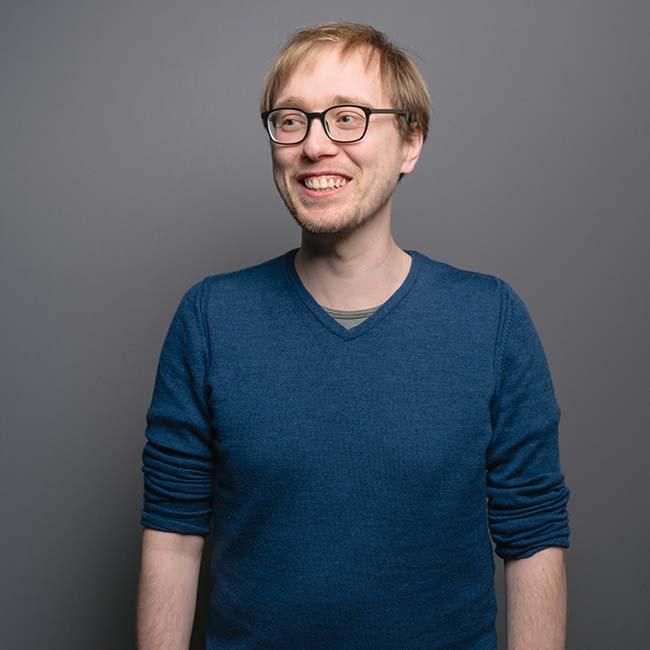 I started at Sheffield Hallam in September 2016 after nearly a decade combining professional theatre directing and applied theatre practice alongside practice-as-research and higher education teaching.

Since commencing my post at Hallam, my research, teaching and practice has been focussed on three key areas: firstly in my role as Performance Director of the independent, Paris-based, international educational, cultural & humanitarian non-proﬁt organization, Yesterday/Today/Tomorrow, I have created a performance methodology which deploys an updated and unique interpretation of Augusto Boal's Image Theatre technique in order to enable embodied and interactive responses by members of the public to drawings created by refugees. Performances and workshops have taken place in Venice (as part of the 57th Biennale di Venezia), Rome, Paris, Berlin, Sarajevo and Sheffield as well as a variety of secondary schools in South Yorkshire. A twenty minute video documenting this research methodology was part of Bryan McCormack's installation, Yesterday/Today/Tomorrow Traceability is Credibility at the Fondazione Cini for the 47th Biennale di Venezia. Research outputs in relation to this work are both performance based and written.

Secondly, my research and teaching in relation to de-centred, inter-cultural and digital Shakespeare pedagogies has resulted in practice-as-research through an on-going partnership with University of Cyprus and the Othello's Island conference hosted in Nicosia. Further to this, I am the guest editor of a themed issue of the Journal for Research in Drama Education, titled Teaching Shakespeare: Digital Processes.

Thirdly, my professional background as a theatre director specialising in theatre in-the-round has been integrated into my teaching, research articles and, in 2021, my monograph, Theatre-in-the-Round: A 360 Degree Guide to its Context, Philosophy and Practice is due to be published by Methuen Drama (Bloomsbury).

Prior to my position here, I was the Associate Director at the Stephen Joseph Theatre in Scarborough between 2013 and 2016, the Education, Community and Literary Director at the Orange Tree Theatre, London between 2009 and 2013 as well working as a freelancer on various productions across the UK.

In these roles, I directed over twenty professional productions ranging from Shakespearean comedy to Victorian Farce to new writing addressing issues of youth isolation. In 2011 I was nominated and short listed for the Off West End Award for Best Director for a production of Three Farces at the Orange Tree Theatre. As well as directing plays I was in charge of the Literary Departments at two theatres and have developed and directed dozens of new plays by both established and emerging voices. At the Orange Tree Theatre I programmed, wrote and led the community and education programme (with a focus on practical explorations of Shakespeare for young people) over a five year period I worked with approximately 55,000 young people and community members across London. I have also delivered outreach programmes for the Almeida, Stephen Joseph Theatre and JASSPA youth theatre.

Having received a university scholarship in 2012, I completed my PhD at Hull University in 2016 which was a practise-based investigation into how young people respond to Shakespeare in performance. As well as holding a doctorate from Hull, I also took a BA degree in Drama there before completed a MA in Staging Shakespeare at Exeter University.

Monograph: ‘Theatre-in-the-Round: A 360 Degree Guide to its Context, Philosophy and Practice.’ (2021) Methuen Drama.

I am second supervisor on a NECAH PhD delivered in collaboration with Hull University.

I have practical working experience of theatre directing, Shakespeare, theatre in-the-round and drama being used as a tool for social change amongst young people and the community. Ever since being made to do public speaking as a potential cure for a stammer as a child, I have enjoyed speaking in front of audiences and sometimes feel more comfortable doing this than speaking to someone one-to-one!

Notable Media Coverage: I have been interviewed on a variety of topics by BBC Radio, the York Press, the Northern Echo and Richmond and Twickenham Times as well as chairing live events, talks and interviews at the Stephen Joseph Theatre and Orange Tree Theatre.