I’ve read every file in the Ministry of Defence’s UFO archives. Here are six of my favourites.

Originally set up after a request from Winston Churchill, the Ministry of Defence’s UFO Desk ran for over 60 years, collecting mysterious sightings and records of strange objects in the sky from observant – and sometimes imaginative – members of the public.

Over the last 20 years, as a journalist and an academic, I’ve read every file in these UFO archives. In my new book I have collected the best drawings and photographs.

Here are six of my favourites. Together they tell a story about the strange objects in our skies – and the influence of popular culture on British life. 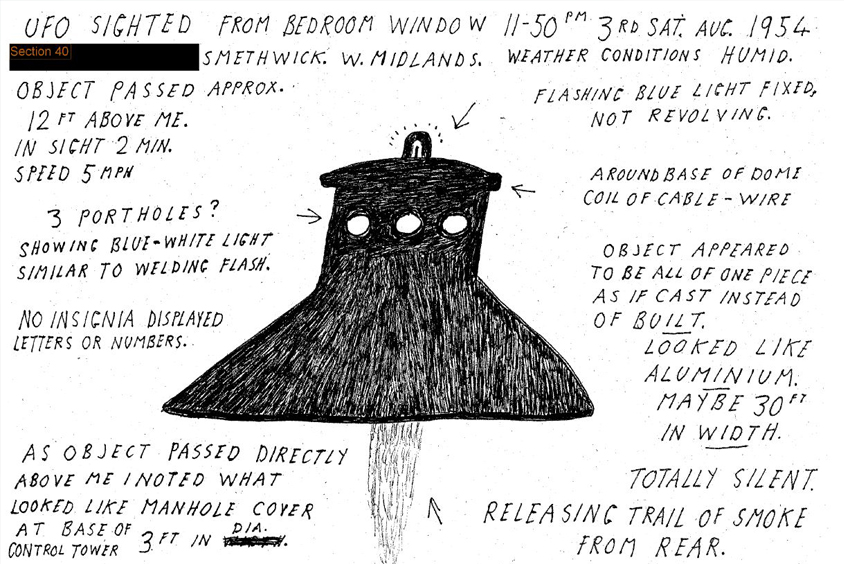 I like this drawing because it shows the naiveté of the 1950s. At that time we hadn’t visited Venus or Mars, so we didn’t know for certain that there wasn’t life there.

In 1953, the spiritualist writer George Adamski caught the imagination with his book Flying Saucers Have Landed, in which he claimed that he had communicated with creatures from Venus and Mars who had come to Earth to avert nuclear war.

This drawing is by someone who claims to have seen a flying saucer over the rooftops of Smethwick in Birmingham. He has drawn it looking just like an illustration from Adamski’s book.

So people were picturing things in the sky based on the form created in that book – showing how popular culture can change our perceptions of the world around us. 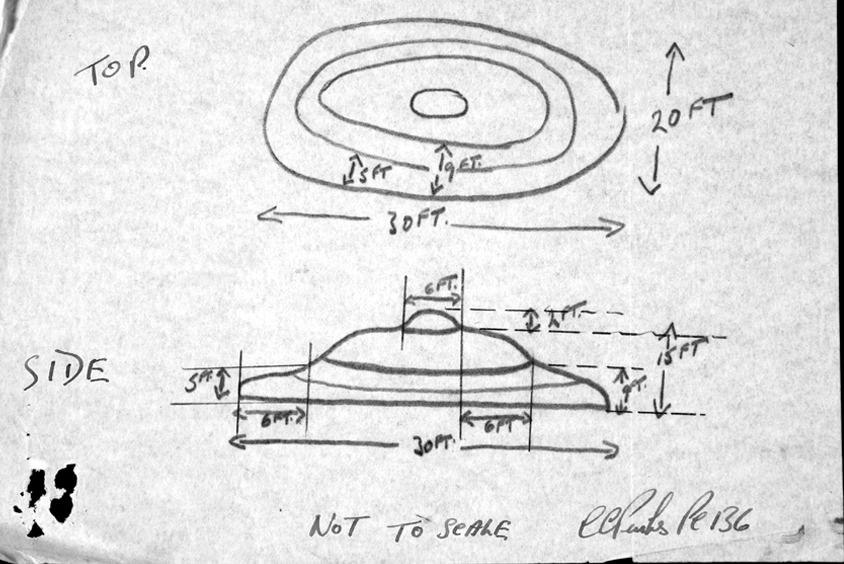 This diagram is part of a three-page report made by a police officer in Wilmslow near Manchester. It was sent to the UFO department in London, who sent an intelligence officer up to interview the policeman about what he’d seen. The man from the ministry was convinced the policeman was telling the truth.

This is a typical example of what’s in these files. It’s not a huge cover-up. It's people seeing things that are unexplained, which are then filed away and forgotten.

It’s the human experience of the extraordinary. Historians today pore over accounts of witchcraft in the 17th century. To me, this stuff is just as interesting. 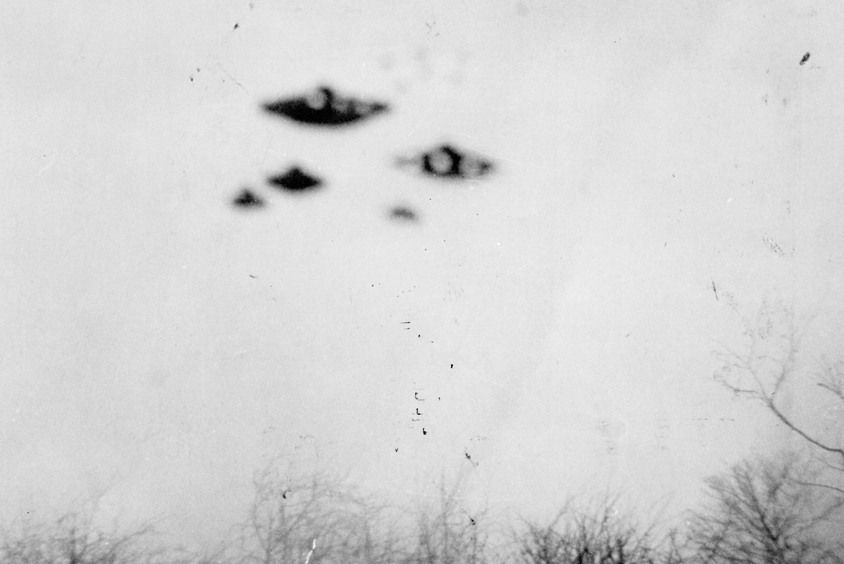 This photo of a classic flying saucer shape was taken by a young lad in Sheffield in 1962. It was published in the national press and he was taken to the air ministry in London for questioning.

In 1972, he confessed the photo was a hoax, made by painting flying saucers on a piece of glass. Then in the 1990s, he rescinded his confession and claimed it was real after all. I’ve met him – and I believe that he believes.

People often ask me if I believe in alien spacecrafts, but I’m not interested in whether it’s true or not – they're just great stories. 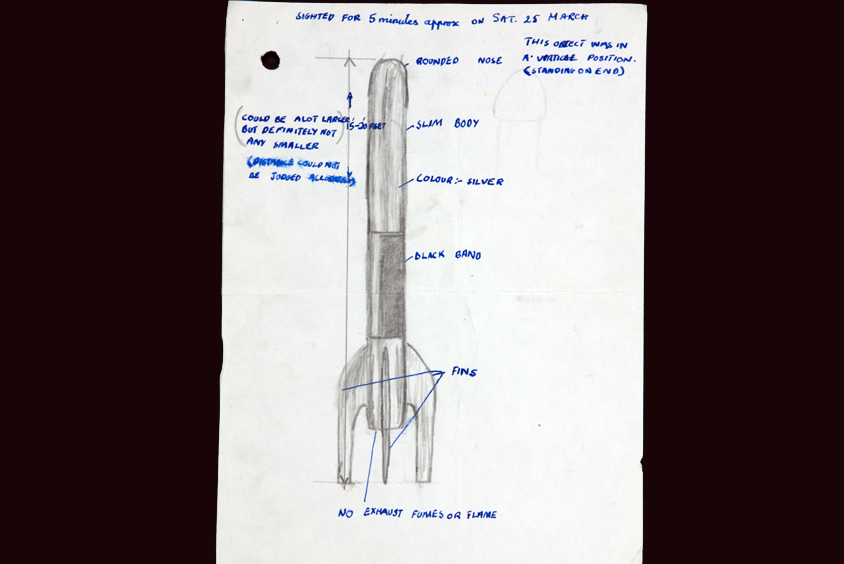 Anyone who claims that TV and movies don’t influence how we see the world should look at this.

This picture was drawn by a woman in North London in 1972 of a UFO she saw in the sky. The letter she got back from the UFO desk said it was probably an optical illusion caused by an ordinary aircraft travelling steeply upwards into the sky.

The interesting thing here is the shape of the UFO – it’s exactly like a rocket from Thunderbirds, which was being repeated on TV at the time. 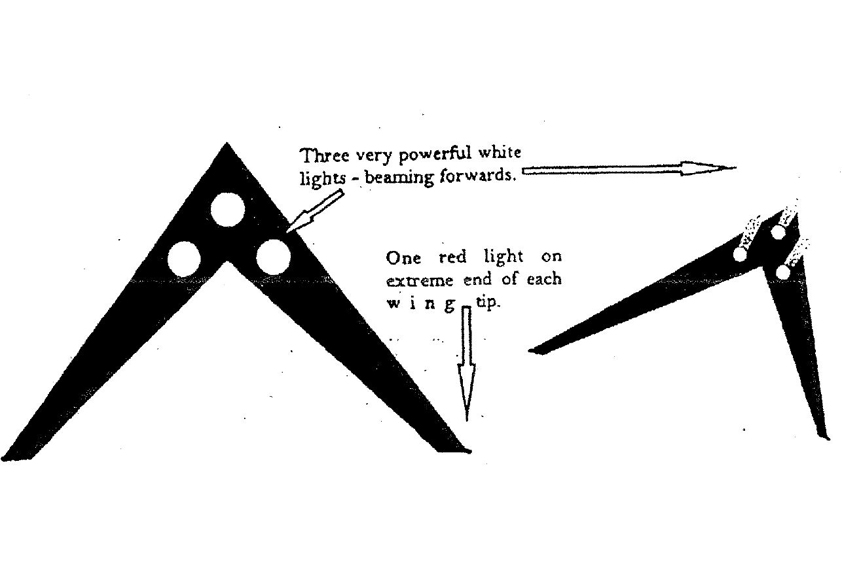 From the late 1970s, we can see the shape of UFOs in the archive change from the traditional flying saucer to more of a triangle with lights, like this example from the Cotswolds in 2000.

There are two reasons for this change – popular culture and technology. In 1977 the opening scene of Star Wars featured a triangular spacecraft. At the same time, the newspapers were full of stories about the new US bomber planes, which were also triangular.

Once again we can see how popular culture was seeping into our collective subconscious, and changing how we perceive the world. 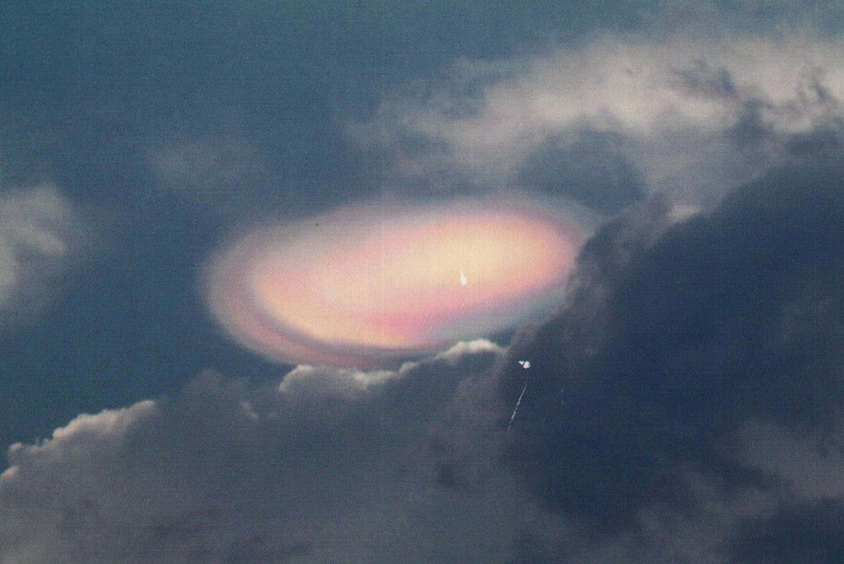 This photo was taken by a retired RAF serviceman while on holiday in Sri Lanka in 2004. He said he thought it was an atomic bomb going off.

I showed this picture to a meteorologist and they said it was an iridescent ice cloud. About 10% of the reports in the UFO archives can be explained by showing rare natural phenomena like this.

Ultimately, UFOs are something that people project onto their perception of the world. In 1957, the psychologist Carl Jung was asked for his views on UFOs. He said, ‘There is an overwhelming amount of material pointing to their legendary or mythological aspect. As a matter of fact the psychological aspect is so impressive, that one almost must regret that the UFOs seem to be real after all.’

It is this will to believe, and the influence of popular culture, that I find so interesting.

UFO Drawings From The National Archives by David Clarke is out now.