In February 2017 CSER travelled to Austria for the third year in a row. We have been providing measuring services for The Jump! A Channel 4 reality show in which celebrities and sports stars compete in a series of Winter sports events.

In 2015 we helped TwoFour (the production behind the show) to measure the height of jumpers launching themselves from a formidable snow ‘kicker’ (more details on our blog).

In 2016 our remit expanded to include measurement in a traditional ‘ski jump’ event.

For the purposes of judging the following requirements were made 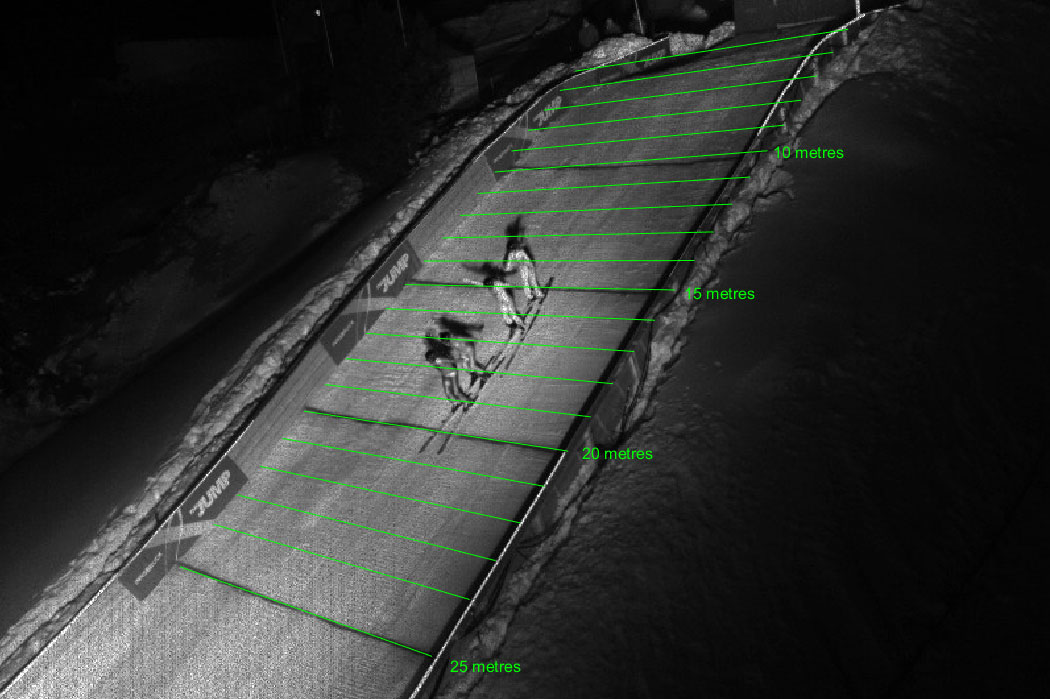 To measure a jump we used two high speed cameras attached to lighting towers. They were positioned to observe the landing area of the event. Two cameras were used to ensure that we had a fail-safe system and it also increased the reliability of our measurements. In practice either rater was within around 5 cm.

Measuring the ski-jump introduced complexity, because the measurement area wasn’t perpendicular to the camera a DLT transform was used. To survey the jump’s landing we created a number of ‘control points’ which were at known distances from the take-off ramp. We located these control points in our camera images and used their positions to create the calibration.

Each jump was measured at the instant that the competitor made full contact with the slope (both skis) and the measurement was taken from the back of the rearmost boot. The pixel co-ordinates were processed using a bespoke software program which was designed for speed and efficiency.

The 2017 show was a great success which saw a new record for jump length of just under 19 metres.

The composite image shows the landing position of each of the finalists. The DLT calibration has been used to map metre marks across the landing slope.