Devolution - Can it Deliver Inclusive Growth?

As the world still reels from Trump's victory in the US and the summer of Brexit, the narrative of people feeling angry and left behind by economic growth has featured prominently in commentaries attempting to explain the seismic events of 2016.

The rise of the wealthy global elite with increasing levels of inequality in Anglo-Saxon economies has been seen to account for the apparent implosion of centrist politics and the rise of the populist right. Undoubtedly, there is a far more complex web of factors at play in explaining Brexit and Trump than economic dispossession and injustice. But the exclusion of some groups to share in the proceeds of growth is certainly a feature of economic change in the UK.

Recent research undertaken by academics at Sheffield Hallam University has explored the relationship between poverty and growth across all 39 Local Enterprise Partnership (LEP) areas across England. Nine indicators captured the extent to which areas achieve ‘inclusion’ as measured by positive outcomes around poverty-related factors such as unemployment and low earnings. The remaining nine indicators measured economic ‘prosperity’ in terms of business creation and workforce skills. The graphic below shows that some areas, such as London and Greater Manchester, which had high levels of poverty to start with saw significant economic growth between 2010-14 (as measured by a high prosperity score) but comparatively little change in poverty and deprivation (as measured by a low inclusion score). This confirms that growth does not always benefit all. 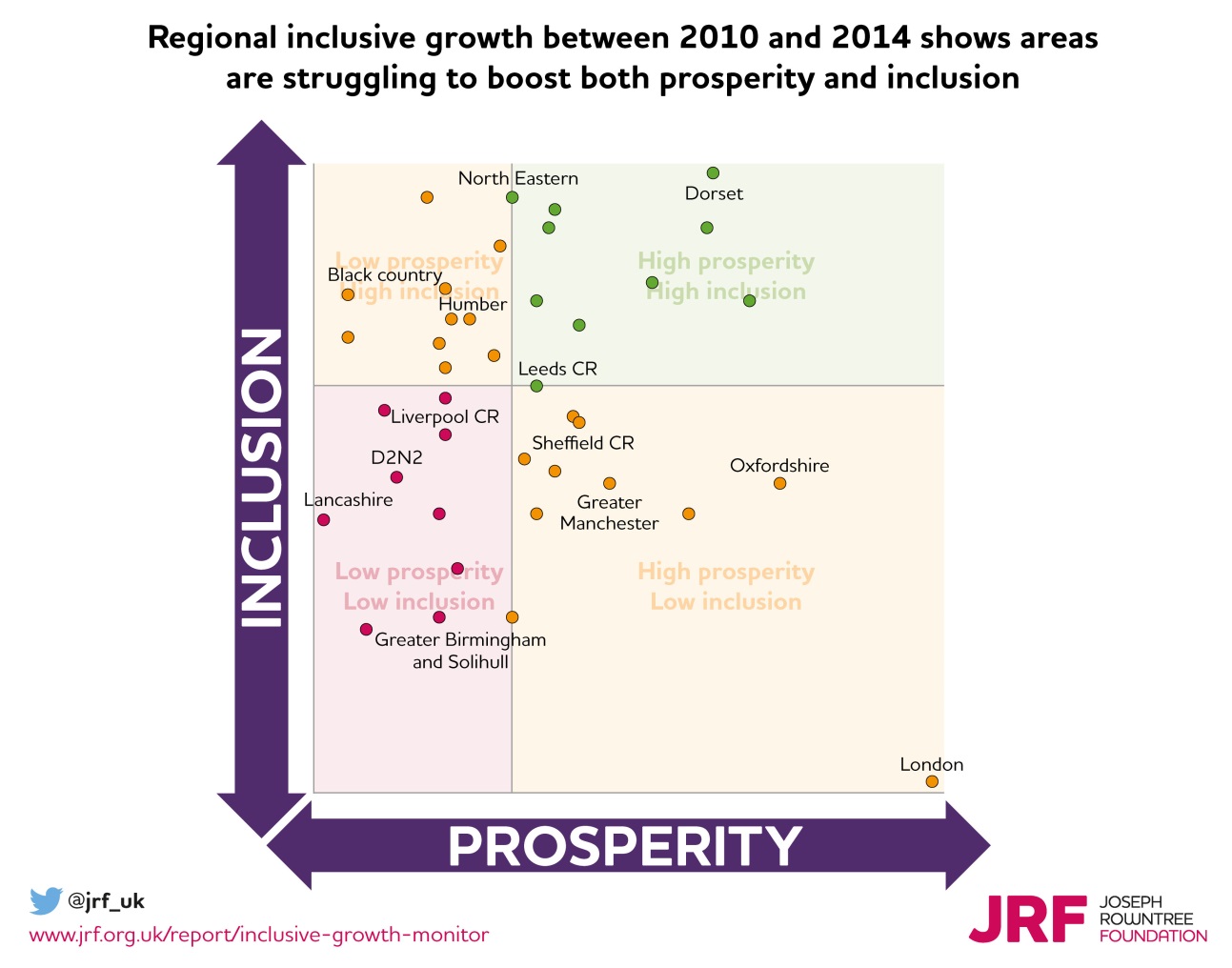 In this context, the growing interest in inclusive growth feels very timely. It's a notion that has been championed by international organisations such as the OECD and has now taken hold in the UK. The RSA have launched an Inclusive Growth Commission whilst devolution has seen city regional institutions such as LEPs and combined authorities promote visions of 'inclusive' or 'good' growth.

The concept of Inclusive growth is a valuable step in challenging the discredited trickle down model which has largely failed to address the persistent and enduring inequalities in the UK's regions and cities. The RSA Commission's interim report makes an important point about future rounds of devolution requiring a stronger focus on social programmes around skills, education and health, rather than just economic development. It also asserts the need to discard the straitjacket of austerity so that localities receive genuine additional funding through future devolution settlements to support inclusive growth activities.

However, the tendency to focus on localities begs a more fundamental question which has not been fully addressed in the debate around inclusive growth: to what extent can local problems be addressed through local solutions? Inclusive growth might be achievable in successful and growing city regions such as Greater Manchester, but arguably may be less viable in areas such as the Tees Valley and the Black Country dominated by 'third tier' towns and cities. Low growth in these areas will mean there are fewer proceeds to go around. Even in city regions dominated by core cities such as Greater Manchester, stark inequalities are still likely to persist in hourglass economies where the benefits of growth will accrue to the highly skilled in better paid jobs rather than the Deliveroo drivers that serve them.

These inequalities are often rooted in wider national and international political and economic factors that all serve to concentrate wealth and income but are not readily amenable to local interventions. How can city regions, for example, respond to the rise of the 'gig' economy, the deregulation and dominance of the financial sector, the loss of tax revenues through offshoring, and national changes to public spending and tax and benefits under 'Austerity'?

Findings from ongoing research we are undertaking for the Joseph Rowntree Foundation on how city regions can shape housing and planning policy policies to support poverty reduction illustrates one aspect of this. Genuinely affordable housing is a key pillar of inclusive growth as it can enable low income households to live in areas close to employment opportunities and provide the security necessary to secure and sustain paid work. Yet conversations with stakeholders from LEPs and combined authorities show ambitions to deliver affordable housing are hamstrung by a number of national policy drivers. These include the prioritisation of homeownership, the extension of right-to-buy that threatens new social housing, and cuts in Housing Benefit entitlements that undermine the rental streams needed to fund investment in housing.

This is just one telling example of how the weight of expectation that devolution can drive inclusive growth is perhaps too high. The deal-based nature of devolution in England means 'asks' and 'offers' are framed around the priorities of central government which are not always conducive to inclusive growth. This may change as city regions become bolder in their requests or, in the longer-term, as the political hue of government changes. But as it stands, a shift towards a radical new model of inclusive growth seems a distant prospect under current governance arrangements.