The Sport Industry Research Centre review of performance in Sochi 2014

Sochi 2014, the Sport Industry Research Centre at Sheffield Hallam University looked at the winners and losers in the Olympic Winter Games. The medals' table clearly shows that the Russian Federation top the table with 13 gold medals and 33 medals in total. Our analysis focuses on how nations' performance has changed since Vancouver 2010. 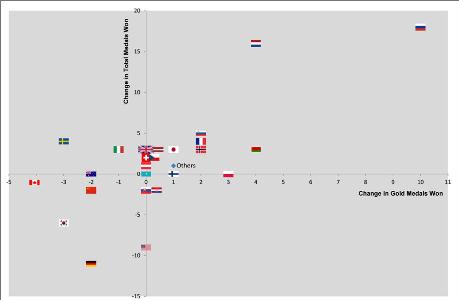 The Russian Federation is identified as the most improved nation with a gain of 10 gold medals and 18 medals in total compared with 2010. Host nations tend to show significant improvement and we identify three key factors that contributed to Russia's success. First, three gold medals were won in Figure Skating which is a subjectively scored event. Whilst there is no suggestion of impropriety, previous evidence indicates that noisy audiences supporting home athletes tend to have an impact on judges who in turn may be over generous in their scoring.

Second, the 'talent transfer' of former South Korean short track speed skater Ahn Hyun-soo, now known as Victor An, proved to be a masterstroke as he won three gold medals and four medals in total - Russia's first successes since short track's introduction to the Olympic programme in 1992. In a similar vein, former USA citizen Vic Wild won two gold medals for Russia in snowboarding following his marriage to fellow snowboarder, Alena Zavarzina, and subsequent change of nationality. It is certainly food for thought when digesting Russia's apparent success that 50% of the gain in gold medals won was achieved by athletes who only qualified to represent Russia during the Sochi Olympic cycle.

Third, three gold medals in sliding events (one in skeleton and two in bobsleigh) and Vic Wild's two gold medals in snowboarding can in part be attributed to the advantage Russian athletes had as a result of being able to train on these facilities much more intensively than athletes from other nations. Success in subjectively scored events and access to competition facilities points to the host nation effect being based on genuine sources of competitive advantage, rather than patriotic athletes performing out of their skins.

The Netherlands won 24 medals in total an increase of 16 medals compared with 2010. 23 of these medals were won in speed skating and the remaining one was secured in short track speed skating. These are early rewards for policymakers in the Netherlands who made a fundamental shift away from funding a wide variety of sports thinly to funding relatively few sports generously.

Great Britain's improvement from Amy Williams' gold medal in 2010 to four medals in total including Lizzie Yarnold's gold medal is recognised with a climb up the y axis of our graph - no increase in gold medals won and an increase of three medals won in total.

With an extra 12 events in Sochi compared with Vancouver and therefore an additional 36 medal winning opportunities, the magnitude of the losses is less than the gains of the winners. Notable losers include Canada, the previous hosts, who were ousted from top spot on the table to third and who also lost the greatest number of gold medals (four). This is a reverse angle on the impact of host nation success which benefited the Russian Federation this time around.

Germany lost the most medals in total (-11) although only two of these were gold and thus Germany's fall down the medal table was relatively modest (from 2nd to 6th place). Germany dominated the Luge winning gold medals in four events as well as one silver medal. However, with the Russians dominating the sliding events and the Dutch taking most of the speed skating events (previous areas of German strength), Germany must reflect on its worst Winter Olympics since reunification.

The USA although winning the same number of gold medals as in Vancouver (nine) dropped from third place to fourth and lost nine medals in total. These were primarily in short track speed skating (-5), Nordic combined (-4) and speed skating (-4) although they were to a lesser extent offset by gains elsewhere, notably sliding events (+5) and freestyle skiing (+3).

The performance of host nations in recent editions of the Summer and Winter Olympic Games follows a predictable pattern. The host's performance increases significantly relative to the previous edition and will be located in the top right-hand quadrant of our graph. In the following edition there tends to be a reduction in performance as can be seen in the case of Canada which is located in the bottom left quadrant of our graph. In 2018 we expect to see South Korea in the top right quadrant of the graph and the Russian Federation in the bottom left quadrant. As for Great Britain, anything less than one gold medal and four medals in total sees us move into the undesirable areas of the graph.