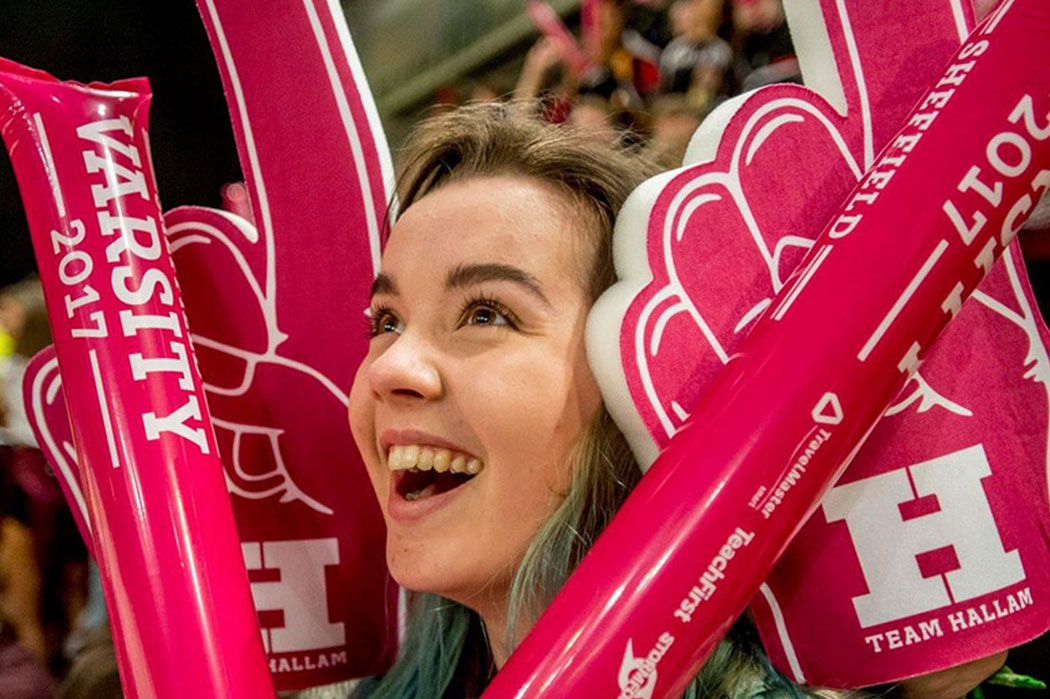 This year marks the 21st anniversary of Sheffield Varsity. From its small beginnings in 1997, the annual sporting competition between Sheffield Hallam University and The University of Sheffield has grown to be one of the largest varsity tournaments in the UK.

This year more than 1,000 athletes represented their university, and around 15,000 spectators came to show their colours and support their team.

We asked our sporting staff, alumni and students about what makes Sheffield Varsity so special.

The final match of Varsity is Ice Hockey at Sheffield Arena. Since 2015, the event has sold out and has set a record for the largest varsity match between universities outside of North America with over 8,000 spectators watching. It’s such a spectacle that students have been known to queue up outside the box office to buy tickets at 5.30am to avoid disappointment.

Dan Porter, head of sports services at Hallam and tourism and recreation management alumnus, remembers taking part in the first ever Varsity rugby tournament which didn’t even draw a single spectator: "Back then it wasn't like it is now, it was a fairly low key event. There was certainly none of that overall team atmosphere. We played rugby. We beat them. That was that!"

In recent years Intra Mural Varsity has become an occasion to rival the main event. It gives all students the chance to represent their university regardless of ability, allowing students who play socially to compete in front of a screaming crowd. So, even if you were the last kid in the class to be picked for the team, you can still be a part of Team Hallam. Sports and exercise science student and member of the Lacrosse team, Sarah McBean, said: "Varsity brings everyone together, all the teams get behind each other and it really feels like one big team."

Hallam's glory years were those between 2004 and 2012 where we remained unbeaten for 9 years. In the interest of healthy competition, changes were made to the scoring system. Whether coincidence or not, this was the first year we lost our winning streak.

Despite the contentious issue of the scoring system, it's always been a close competition adding to the anticipation and excitement which makes Sheffield Varsity unique.

Varsity is the perfect way to celebrate and showcase the fantastic sporting talent we have at Hallam. Students spend months training towards what has become the highlight of the sporting season.

In recent years some of the athletes who have cut their teeth at Varsity have gone on to represent Great Britain at the Olympics or secure professional contracts.

Last year, swimmer Max Litchfield had just broken the British record in the men's 400m to qualify for the Rio Olympics and then competed in Varsity the next week. Other Sheffield Hallam sporting alumni who have gone on to get signed are footballers Raul Correia, Harry Flowers, Jake Muldoon and Matthew Taylor. And Phil Roper, Brendan Creed, David Goodfield and Liam Ansell have all recently joined the GB men's hockey squad.

Dan Porter remembers vividly the moment he saw England rugby player Dave Strettle score a winning try for Hallam at Varsity: "It was a really sunny day and I remember it well- he cut through to score the winning try. The crowd went mad! I knew then he was going to be a star."

Varsity is all about respect and fair competition. Before they compete, all athletes declare the Varsity Oath; values which we feel extend beyond the pitch and well after the whistle is blown.

Varsity is a showcase and celebration of student sport in the City of Sheffield, and I am proud and honoured to represent my university in the competition. On behalf of all competitors and spectators I promise that we will take part in Varsity ensuring we compete in the true spirit of sportsmanship, fair play, and respect for our opposition.

We will give our all for our team-mates, and we will abide by the rules that govern our sports and the overall Varsity competition.

We will respect all competitors and spectators regardless of their race, gender, sexuality or ethnicity, and we will respect the communities and facilities in which the competition takes place.

We win together, and we lose together.

Pride, respect, fair play, and sportsmanship – this is the spirit of Varsity, and I am proud to represent my University.