'In a future where intelligent androids are fully integrated with everyday life, how do we distinguish ourselves as human?', asks Dr Lyuba Alboul Senior Research Fellow in the Materials and Engineering Research Institute (MERI) at Sheffield Hallam University.

Answers to this and other robotics, AI and VR-related questions can be found at the 'Fictional human and real robot: sharing spaces with robots' event organised by researchers from MERI's Centre for Automation and Robotics Research (CARR), the Cultural, Communication and Computing Research Institute (C3RI) and Sheffield Robotics.

The event is part of the prestigious Being Human Festival, under the banner of 'Hope and Fear'. With the rapid advancement of technology, we are moving into a new type of society that will integrate physical, cyber, and social spheres based around interactions between these worlds in real time. With steady progress being made in research, similar to the computer revolution of the last few decades, many people believe a robotics revolution is upon us. Robot-human interaction is, in fact, already a reality. 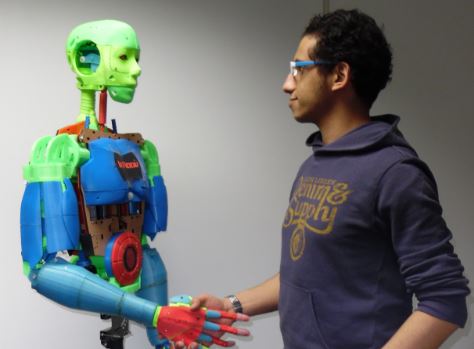 The interactive displays will include a virtual future robotics museum, creation of customised human avatars, robots display, AI and Robotics discussion, a VR/AR experience and writing workshops. Visitors and guests will have the opportunity to interact with several robots. CARR's newest AI member, Pepper, will also be present. Pepper is a human-sized, social, humanoid robot. Apart from Pepper, two other robots will be taking active part in the event: Robot Betty and Kermit/Green. Betty is a portable, social robot, and Kermit/Green is based on the InMoov open source 3D printed life-size robot by Gael Langevin.

As part of the events on 19th and 20th, visitors can also participate in the writing of a short script that will later on be edited into a coherent narrative by Sue Bodnar, creative writing tutor/practitioner. Parts of those scripts will be used for the creation of a short movie that will be aired in Sheffield Hallam's The Void on 23rd November at 17:00.

The 'Fictional human and real robot: sharing spaces with robots' events are supported by the African Community (black and minority ethic), Crisis, and Bank Street Arts.

With special thanks to Professor Wayne Cranton