A Sheffield Hallam University researcher has won an international award due to his groundbreaking work in creating protective coatings for everything from hip joints to satellites.

Professor Arutiun Ehiasarian, head of the University's National HIPIMS Technology Centre UK, has been recognised by the European Physical Society (EPS) for his work which applies the use of plasma physics into the technology and engineering sectors.

High Power Impulse Magnetron Sputtering (HIPIMS) technology was first used and implemented on large scale at Sheffield Hallam and is now marketed by the industry worldwide. The scientific plasma technology, backed up by multi-million pound equipment in Hallam's £6m laboratories, pulses out several megawatts of power to create a highly ionised gas-metal plasma.

The plasma is used to produce a special coating to enhance performance of hip joints, turbine blades, piston rings and space satellites, by reducing the amount of wear-and-tear, extending their use.

The Plasma Physics Innovation Prize was awarded to Prof. Ehiasarian, who works withinSheffield Hallam's Materials and Engineering Research Institute (MERI),for the use of plasma physics in coating technology and engineering.

The award was presented during the opening ceremony of the annual EPS conference, held this year in Prague, Czech Republic 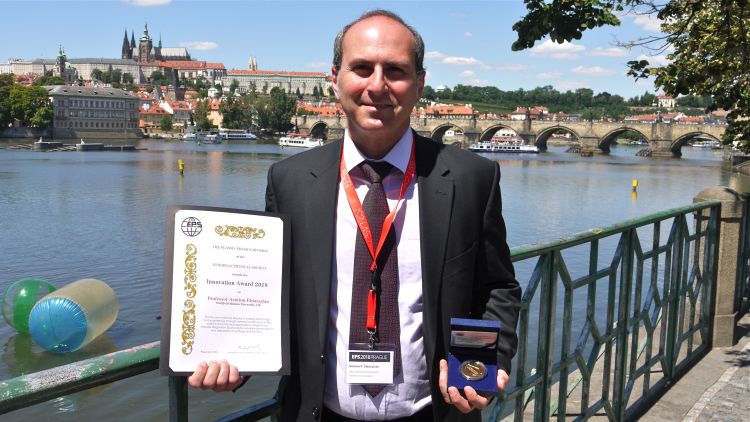 Prof. Ehiasarian said: "I am honoured to receive the EPS Plasma Innovation Award. It is thanks to my colleagues at the National HIPIMS Technology Centre UK and their hardwork and dedication that means that Hallam University is leading the way in the sector and I am very humbled to receive this award.  It is especially dear to me as it embodies the strive to use plasma physics to create real products, which has inspired my whole research career."

The prize was established in 2008 by the EPS Plasma Physics Division to acknowledge and promote plasma physics research and its benefits, such as applications in medicine, waste management and material processing.