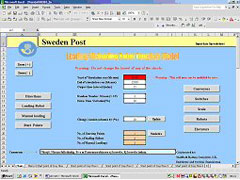 SP has been using computer simulation to address various operational issues for many years. Having invested in modern and automated equipment at sorting centres, Sweden Posten wanted to simulate all sorting centres in the country. Sorting centres encompass both automated and manual based systems. For example, automated sorting machines are used to sort letters and place them on trays. A network of conveyors is then used to distribute trays to various trolley loading stations. Either robots or manual operators may be used to load trays into waiting trolleys. Different sorting centres have very similar equipment but with different layouts and operating characteristics.

Sweden Post use ARENA simulation software for its applications. Traditionally, simulation engineers would develop simulation models for each and every sorting centre using ARENA's standard building blocks. This is a time consuming and tedious process. In order to facilitate rapid model building and ease of use, the researchers from the Centre for Systems and Enterprise Engineering proposed the development of customised simulation objects and EXCEL based interface for new simulation objects.

Having identified the operating characteristics of sorting centres, a range of customised simulation objects were built using the professional version of ARENA simulation software.

To facilitate the management of input data, a comprehensive EXCEL based interface was built. All input data required for the models is entered via this interface. The output data from simulation runs are also sent to an EXCEL model with extensive data analysis capabilities.

For example, the output EXCEL model automatically produces various graphs to illustrate the operation of the system at a regular interval.

The model development time has been drastically reduced, enabling simulation engineers to build models of alternative layouts quickly. The EXCEL-based user interface has eliminated the need for end-user training, and experiments can be done simply changing the values in EXCEL based input files. All vital output information is presented in both tabular and graphical forms.