The algorithm operates in unsupervised mode hence does not require any parametrisation. This allows the physician to fully focus on the task of identifying diseased areas.

The software is currently being evaluated and verified by a number of sonologists and radiologists. 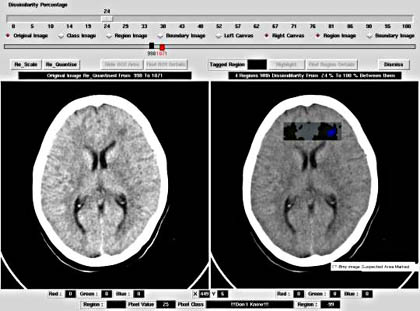 Looking at the original image only an expert sonologist will be able to pick up this abnormality. Therefore this program will be surely useful to differentiate in case of borderline pathology where the sonologist will not be very sure of the diseased area.

The separate region within the diseased area gives additional information that, that area has got the core of the disease, and it is spreading out from that location'

In this project VTK and Tcl/Tk is used to implement visualisation software for 3-D data. One such example is the use of polygons generated using the marching cubes algorithm which is able to approximate iso-surfaces. (Note, that in the United States this idea is covered by a software-patent).

Using an input-device with 6-DOF, it is possible to display segmented data in real-time, corresponding to the real-world position designated by the input-device.

This project involves the development of a calibration system for medical ultrasound machines.

Images captured at different focus levels are then related to the maximum depth. The project has implemented an untracked method of scanning breast phantoms in a systematic way. 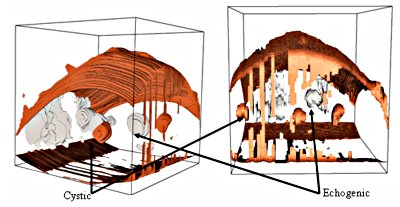