PRONACOM was designed to promote integration between complementary scientific communities and encourage more efficient use of resources.

Thirteen groups from both industry and academia were involved in the PRONACOM project.

The main objective of the project was to develop, study and evaluate nanocomposites based on thermoplastic and thermosetting matrices reinforced with inorganic nanofillers. A particular focus was on the production of nanocomposites for the automobile industry.

For thermoplastics the main interest is for polypropylene and polyamides, whereas for thermoset the focus is on unsaturated polyester, vinylester and epoxy resins.

Selection and characterisation of nanofillers

However, Sheffield Hallam University used both Cu and Cr X-ray tubes so that spacings of up to 40 and 70 Å, respectively, could be routinely accessed.

Sheffield Hallam also used variable temperature XRD (VT-XRD) to investigate the thermal stability of the d-spacing. Figure 1 illustrates how d-spacings, obtained using VT-XRD, can be used to obtain the relevant information. Note that I.34 TCN splits into two discrete spacings near 100 degrees celsius. Thermogravimetry (Figure 2) can provide information on thermal degradation of the sample as a whole but does not provide any data regarding gallery height. 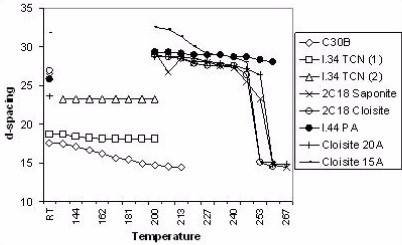 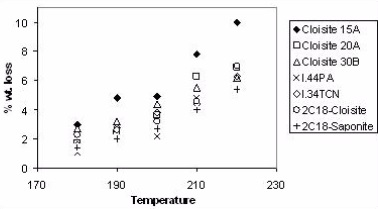 The thermal stability of the nanofillers was determined using TGA. This information was crucial in order to identify the processing window available since thermal degradation of the organomodifier can result in poor nanofiller dispersion and dis-bonding of the polymer from the nanofiller.

Dynamic TGA analysis revealed that Cloisite 30B and 10A exhibited the lowest onset temperatures at 168 and 173 degrees celsius respectively, whereas the other nanofillers did not begin to degrade until temperatures between 195 and 207 degrees celsius were reached. The organo-modifiers on Cloisite 30B and 10A contain hydroxyethyl groups and a phenyl ring, which offer improved compatibility with certain polymers, but their thermal stability is compromised.

Figure 2 shows that Cloisite 15A exhibited the most significant isothermal weight losses as a function of temperature. Comparison with Figure 1 shows that the d-spacing was relatively stable near 30 Å until 250 degrees celsius and then collapsed down to 15 Å.

TG-MS was used to obtain more detailed information concerning the breakdown products being released as the sample temperature increased. An important result was that water (m/z= 18) was released above 200 degrees celsius. This was attributed to the removal of water associated with the cationic head group on the surfactant. This reinforces the fact that organoclays are organophilic, and not hydrophobic, in nature.

In addition to the results described, fundamental characterisation of the nanofillers was undertaken which identified the true organomodifier loading present (via TG weight losses, CHN analysis and LOIs from XRF). Moreover, the elemental composition (XRF) of the clay used by both the major producers was almost identical, suggesting a common source.

Compounding, production of nanocomposites at lab scale and characterisation

A major target of the work performed at Sheffield Hallam was to determine whether a crown cup extruder (Figure 3) could be used to produce clay-PP nanocomposites comparable to, or better than, those obtained using conventional twin screw extruders. The crown cup extruder, manufactured by Kaltor, a Sheffield based SME, can be retrofitted onto single screw extruders. This makes an attractive avenue to transfer nanocomposite production into small and medium-sized companies in the automotive supply chain. Several other factors were investigated to determine their effect on the dispersion of nanofillers within the polymer/compatibiliser and the subsequent properties of the nanocomposite produced:

Apart from the use of the crown cup compounder and two bespoke clays prepared at Sheffield Hallam, the influence of most of these factors on the properties of the resulting nanocomposites are available in the literature. Irritatingly, literature studies report polymers of different melt flow indices, extruders with different screw designs, different organo-modifiers, which means that a systematic, comprehensive investigation is lacking. This was overcome in the PRONACOM project.

The work carried out at Sheffield Hallam has successfully shown that the crown cup compounder has matched the improvements observed by those in the literature and those obtained by other PRONACOM members.

XRD analysis showed that the degree of dispersion varied depending on the particular combination of factors used. All of the nanocomposites produced were mixed exfoliated/intercalated systems, although some samples had only small amounts of intercalated layers. The extent of dispersion for all the organomodified clays was similar, although one of the bespoke SHU clays exhibited an increased d-spacing. The best clay dispersion in the lower molecular weight polymer occurred when 1.0 weight per cent (wt%) maleic anhydride modified compatibiliser was used rather than that with 0.2 wt% maleic anhydride. Better dispersion was also achieved when the ratio of organo-modified clay to compatibiliser was increased from 1:1.2 to 1:3. The best tensile strength result was an increase of 22 per cent (32 to 39 MPa) when both compatibiliser and organo-modified clay was incorporated (18 wt% of 0.2 wt% maleic anhydride modified compatibiliser and 6 wt% Cloisite 15A, respectively). However, when using higher concentrations (18 wt% rather than 5 wt%) of the 0.2 wt% maleic anhydride modified compatibiliser, the tensile modulus decreased from 34 to 29 per cent, i.e. 1009 to 967 MPa. The tensile modulus of the pristine polypropylene was 751 MPa.

The improvements in tensile and thermal properties were similar for all the different organoclays and showed that, at the extent of dispersion achieved in the nanocomposites, no major effects due solely to the different organoclays were evident. It was noted, however, that in the absence of compatibiliser the interlayer spacing of the commercial organoclay decreased, whereas no decrease was observed for those manufactured at Sheffield Hallam. A representative selection of the thermal and tensile data collected at Sheffield Hallam is presented in Figure 4. 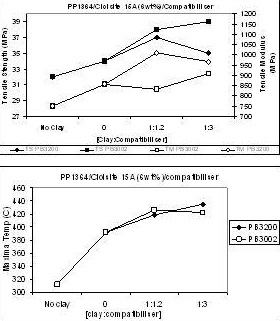 Figure 4. Data highlighting the improvements in tensile and thermal properties observed in the nanocomposites

When 6 wt% organoclay was mixed with 14 wt% compatibiliser and 80 wt% polymer (medium MW) the Izod impact strength was only reduced by 3.0% compared with the pristine PP. This is a trend observed in other polymer-based nanocomposites and is advantageous since the addition of traditional fillers such as talc and calcium carbonate can reduce the Izod impact strength by 25 and 28 per cent, when added at 20 wt% loading.

A direct comparison of the results with the state-of-the-art is not possible because other workers have used different polymers, extruders, compatibilisers, organoclays, etc. However, a study of the literature shows that the properties of the Sheffield Hallam samples exhibit similar enhancements in tensile and thermal properties, with comparable extents of nanofiller dispersion. For instance, Xu et al. [1] showed that when 6 wt% of montmorillonite, modified with C16-alkylammonium bromide, was mixed with maleic anhydride compatibiliser and polypropylene, a 17.5% in tensile strength was observed compared to the pristine polymer. Zhang et al. [2] also showed an increase in tensile strength of 15.6% using a C18-modified montmorillonite and 0.6 wt% maleic anhydride modified compatibiliser. Garcia-Lopez et al. [3] observed a 42% increase in tensile modulus when incorporating 7 wt% organoclay in compatibiliser and polymer.

The increases in tensile strength observed for nanocomposites are much better than those achieved using traditional fillers such as talc or calcium carbonate, since no improvement occurs at 20-40 wt% talc and a decrease is observed when using 20-40 wt% calcium carbonate [4,5]. The improvements are comparable to those obtained using glass flake, although 30 wt% glass flake is needed to increase the tensile strength by 33%, whereas only 6 wt% organoclay (equivalent to 3wt% inorganic material) increases the tensile strength by 21% making the nanocomposite a lighter product. These weight savings are of particular relevance to the automotive industry, because this can create monetary savings in terms of using less material to manufacture the components and ultimately reductions in fuel consumption due to lighter automobiles.

Complimentary data on polypropylene nanocomposites has also been obtained by other members of the PRONACOM consortium and is detailed in Deliverable D.2.2.2. Different polymers were studied and similar increases in tensile and mechanical properties were observed. One particular approach worth noting was the production of PP nanocomposites by ICECHIM using a masterbatch approach, where nanofiller dispersion was much improved. Round Robin tests were also completed amongst all the PRONACOM partners in order to perform direct comparisons between experimental data from different laboratories since, for example, tensile measurements from different testing instruments are notoriously instrument-dependent.