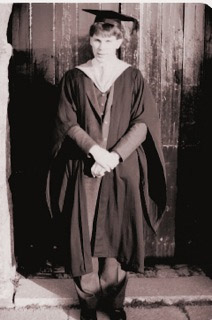 Having come from London, I remember saying that I was going to the land of terraced houses and flat caps. What a terrible stymied view I had of Sheffield back then. I was a late entry to the Polytechnic. I didn't do well in my A-levels and had to retake one. So, the following year, I got on the train at St Pancras station, my father leaving me on the platform telling me it was the worst day of his life, even more than when my mother left him, because I was going to be nurse. A good start all round really!

The Sheffield City Polytechnic nursing degree was one of the first in the UK, and I was in the first intake. There were 12 of us and we were a novelty. One of two men, I was soon left by the other one who went on to join the Air Force - obviously not for him!

I first lived with a family of five children becoming their live-in baby sitter. After a term I left to live in Marshall Hall on Collegiate Crescent. Now life really began. It was fantastic to be with a group of other people the same age, all starting out. I made some great friends.

We spent the first three months understanding people as they lived and worked. We started by considering health, rather than ill health. We visited people in their own homes and in their workplace – we even went down a coal mine. I will never forget it - how on earth did those men go down that lift every day and end up crawling on their stomachs to the coal face? It took several baths to wash the coal stains and dust off!

As well as attending classes at Collegiate Crescent, we also worked full shifts, night and day, usually eight weeks at a time. We were immersed into the world of nursing. Other students had long holidays, whilst we worked on the wards which was quite a lonely experience at times.

Sheffield is fantastic. I loved the fact that the Polytechnic was right in the heart of the city. Bus fares were 5p, and I lived for three years in various shared houses, and so enjoyed living, working and studying in a place that I have very fond memories of, with such friendly and warm people.