The simultaneous ingress of acetone and water into dried PVOH-clay nanocomposites containing 2.5 wt% or 5 wt% of well dispersed Na-Cloisite, using FTIR-ATR, was compared with that into pure PVOH films. The rate at which water (δ(OH); 1630 cm-1) and acetone (ν(C=O); 1703 cm-1) moved through the PVOH films (Figure 1) was significantly reduced (i) at high acetone concentrations (Figure 2) and (ii) when clay is incorporated in the PVOH film (Figure 3).

For example, it takes 9 min and 17 min for water and acetone, respectively, to saturate a 25 ± 5 µm PVOH film containing 2.5 wt% of well dispersed clay when the acetone:water ratio is 90:10 v/v compared with ca. 1 min for a pure PVOH film when the acetone:water ratio is 70:30 v/v. The presence of significant quantities of water in the PVOH (nanocomposite) films was necessary before acetone began to permeate the film.

The acetone entering the evanescent field was always highly hydrated even if the water content of the reservoir in contact with the film was low. There was no substantial evidence that the presence of clay altered the way in which the PVOH interacted with the acetone:water mixtures. The clay only acted to increase the tortuosity of the path through the film to the ATR prism (Figure 3). 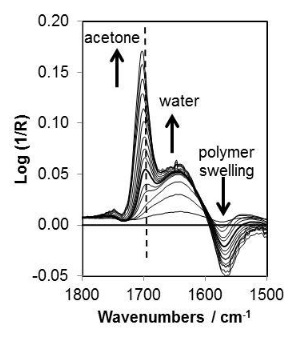 Figure 1. Time dependent changes in the spectra for the 1500 to 1800 cm-1 region at 40 oC for the diffusion of water and acetone (from an acetone:water mixture of volume ratio 90:10) into a PVOH nanocomposite - film, containing 5 wt% clay, dried at 40 oC. The spectrum of the dry nanocomposite film has been subtracted in each case. The dashed vertical line is the position of the ν(C=O) band in an acetone:water mixture of 1:99. 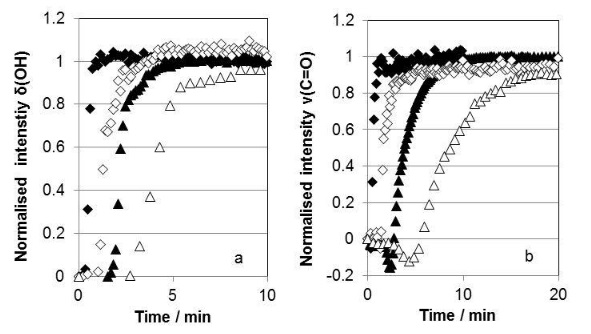