Throughout the twentieth century, architects have been striving for the transparent/translucent building - notably Pierre Chareau's Maison de Verre, Mies van der Rohe, with iconic buildings such as the Barcelona Pavilion and the Farnsworth House at Plano Illinois, I M Pei's Pyramid at the Louve and a series of works by Sir Norman Foster starting with the Faber Dumas Building in Ipswich completed in 1975. The advances, spearheaded by Pilkington's R&D department, in the manufacture of float glass for architectural purposes was significant in facilitating the ambitions of architects during the later half of the century. Whist the innovative step in the manufacture of architectural glasses and in lightweight curtain wall configurations has supported the development transparent structure the development of concretes or concrete-like materials has not supported the same formal opportunities. This research builds on and develops work in the programme open-loop solutions for recycled glass from the consumer, construction and automotive streams and investigates the proposition 'Are translucent/transparent structures possible'.

From the beginning of the research a mentor user group was established to monitor and advise the research team and included structural engineers and manufactures. The input from the group was particularly significant throughout the research programme in identifying standards testing and performance parameters.

At the beginning of the research in consultation with the industry based evaluation/user group an appropriate mechanical value comparative needed to be established to test and validate the developing outcomes. The obvious values and standards criteria were those used in the testing of concretes.

The values notated below were deemed appropriate but the inclusion of VHS concrete, a USA military development, was only useful as an extreme comparator of values against test regimes.

To facilitate the theoretical modelling, an initial series of propositions based on the current knowledge (AHRB award for 'Open Loop Solutions for recycled glass from the consumer, construction and automotive streams') were manufactured and submitted for testing. These tests established the fundamental model composites and values to compare, review, assimilate and develop subsequent iterations of the composite. Whilst this testing provided comparative mechanical values appropriate for the stage of the research, in pursuing the question 'Are translucent/transparent structures possible?' the first trials could not be considered translucent. Therefore the testing was curtailed after the 7-day values were established. The smaller glass particles (measured in microns) used as filler in the previous composite did not aid the quest for translucency but confirmed the fundamental viability of pursuing a non-translucent composite. These outcomes provided the information to develop iterations to the composite mix to pursue the notion of translucency.

Whilst the waste glass supply stream proved robust, the proposed increase in aggregate size became a problem in relationship to the protocols of tensile strength testing nominated. It became necessary to contact the British Standards Committee (BSC) and following an exchange of correspondence outlining the research with Professor Tom Harrison of BSC we were able to identify a recently developed standard for determining the tensile strength of the composite; BS EN 12309 (part 6) Testing of hardened concrete - tensile splitting strength of specimens. A range of samples were then produced for standards testing and submitted for 7 and 28 day testing.

In the search for transparency/translucency, mechanical values of the composite altered the new control achieving higher performance in tensile and compressive strength but lower values for flexural strength. Therefore as new propositions were developed for translucency, further iterations of the opaque mix were developed to attempt to unify performance across the proposed palette of options.

Review and assimilation of both the values notated in the strength comparison table and their associated translucency narrowed the palette of propositions and a refined range of mixes were developed and tested. The resultant outcome established the mechanical value performance and provided the basis for further testing and a wider end user engagement.

For the virtual modelling it was decided to use an existing iconic building, Mies van der Rohe's Farnsworth House (utilising the new control composite to re-state the Farnsworth House would consume 103,387.47 kilos of waste glass).

The initial attempts at virtual modelling the formal qualities of the developed composite, even utilising high-end software programmes, was a difficult process of representation given the nature of the material. But the outcomes, coupled with the test results, provided significant images and information for instigating debate, dissemination and exhibition material.

The crushing of structural elements proved a greater problem than had been expected and significant resources went into crushing the structural elements for closed loop reconstitution and standards testing. Whilst the 'crushing' had been a significant problem the subsequent outcomes exceeded the theoretical modelling outcomes. The 3rd lifecycle material achieved mix ratios of 82%+ saturation whilst maintaining acceptable performance levels.

Based on the results above and subsequent feedback from the user/mentor group, a further test was nominated and undertaken to validate the developing composite. This test was to ascertain the materials bond strength to any reinforcing embedded within the material. A comparative Pull Test was carried out: 10mm reinforcing bars were embedded in cylinders of the translucent composite measuring 150mm diameter by 300mm high. To make a comparison of bond strength cylinders of 50N concrete were cast with the reinforcing rod also embedded. The Pull Tests were carried out on both materials after 28 days curing. Cubes of both materials were also cast from the same mixes in order to confirm the compressive strengths of both materials. The testing laboratory manufactured the comparative concrete samples.

The BS639-11 Creep Test (six month duration) was delayed for five weeks in order to be able to test a refined mix ratio which achieved the optimum translucency and mechanical performance, utilising glass from the nominated waste streams.

Advanced climatic testing was carried out on the translucent mix and the 3rd lifecycle mix. The tests performed were as follows;

Resistance to Humidity (freeze thaw cycle) 100 cycles of 40°C and -10°C with a relative humidity of 60% programmed at 4 cycles per day.

Resistance to artificial weathering (UV radiation and water). After 500 hours of exposure the sample showed signs of yellowing. This was localised to the surface that had been exposed and did not extend through the full thickness of the sample.

Determination of resistance to liquids (water immersion method). Samples were immersed in demineralised water for a period of 500 hours. A visual inspection of the samples was carried out with no deterioration evident in either mix.

A further evaluation test was carried out on these samples to determine the compressive strength of the material after climatic testing.

With the exception of the surface yellowing of the composite, after advance climatics testing, iterations to the mix ratios, outcomes and subsequent lifecycle testing proved positive and, a structure has been developed for long term testing and observation, of dimensions 2230 mm X 2300mm x 200mm and weight 820 kilos.

The rationale behind the configuration and subsequent location is as follows.

Whilst standards and the advance climatic testing establish validation parameters, these are still 'lab based'. For example, the freeze thaw regime is based on the whole sample undergoing test cycle, whereas in many situations a single element of a structure may be substantial in a 'freeze' situation but with sections above zero or vice versa. The configuration, location and loading on this structure will provide a model for more complex 'real-life' observation and review.

The role of the mentor group was invaluable in nominating testing regimes and validation values, they also provided a dissemination conduit into their own professions and industries which lead to support for specific applications of the developing material where the standards validation achieved would support the intended application. Feedback from end users in these 'real world' applications validated findings at the time or informed/defined further iterations to the research programme See B2B store and Blackpool.

At the beginning of the research programme Are translucent/transparent structures possible? an international search had been made to verify and protect the intellectual property of TTURA through the Patent Cooperation Convention further searches were conducted to validate the research question. These searches included; the Cordis database, Optics. Org, Design and Applied Index, Avery Index to Architectural periodicals, Arts and Humanities citation index, UBC Library, Design and Applied Arts index, Material ConneXions and Scientific Citation index. Whilst these searches revealed no equivalent work in the field an opportunity arose to disseminate the interim findings of the research through the 6th International Design Resource Award (IDRA) Roddis and Slater subsequently won the Professional Award. More importantly the awards seminar and exhibition in Japan and subsequent exhibitions and press coverage in the USA and UK disseminated the research widely and confirmed the outcome of the initial searches. It was also pleasing to receive interest in the research from the research division of Skidmore Owens and Merrill in the USA and ARUP in the UK.

This city centre store has been open for just over eighteen months and the footfall, in the store, is in the region of 70,000 based on a conversion rate of sales to customers entering of 1: 2.5.

Opened in autumn 2003, the B2B store received much publicity in the design and fashion press due to the translucent staircase and subsequently the B2B store won the Drapers Award for Interior Design. The configuration of the translucent elements were relatively simple in both form and manufacturing requirement and in this respect did not instigate iterations to the research but have validated the composite as fit for purpose in a specific environment.

The press coverage of this commercial interior instigated enquires from the ARUP partnership, regarding use of the developing material in a scheme they had been contracted for 'Blackpool Wave'. Whilst the research team had no input into the design of the components, the manufacture and location of the work would test and provide knowledge and validation related to specific weathering properties and its usability in a manufacturing context. As notated, the developed material has undergone advanced climatic testing but the location will further test the weathering properties related to salt spray coupled with seagull excrement. The configuration of the components was complex requiring sophisticated casting techniques. The manufacture of these components tested the ease of use in a manufacturing situation and provided information to establish the appropriate material viscosity.

Special note is made to Gary Nicholson and Tom Slater, two former Research Associates who provided valuable support to this project.

The 'arch structure' is currently 12 months into the 24-month monitoring and to date observations confirm the findings of the BS3900 advanced climatic testing. Samples of the structure will be taken at the end of the 24-month period to facilitate mechanical and other testing.

TTURA - The research programme was funded for 12 months by the AHRB (now AHRC) and... 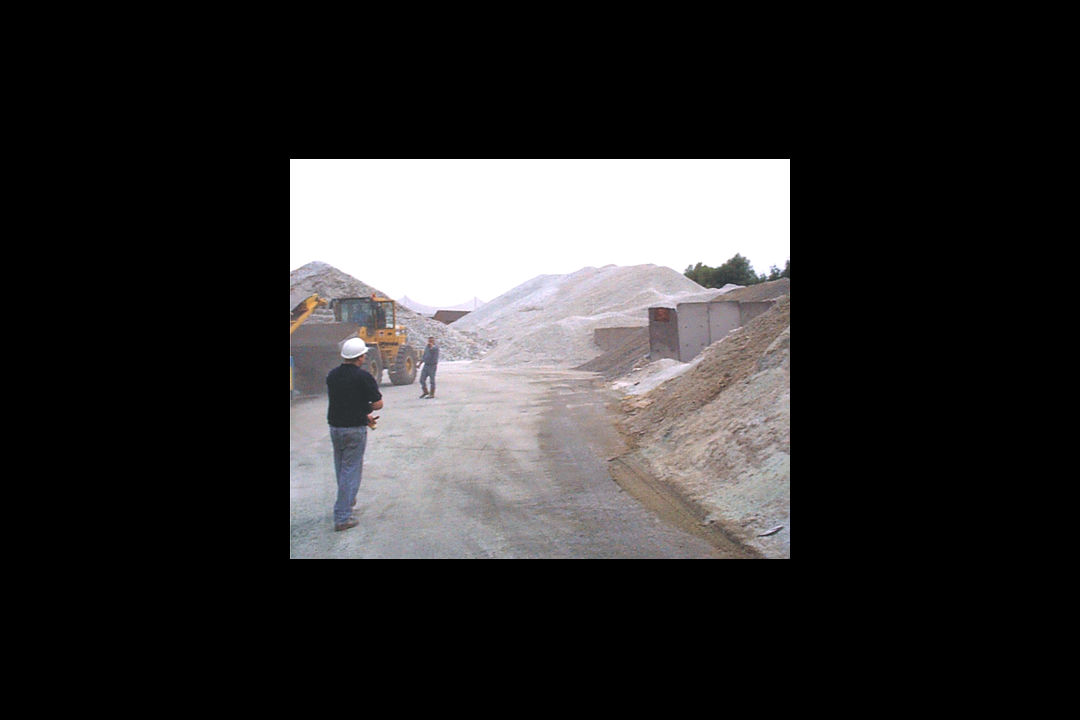 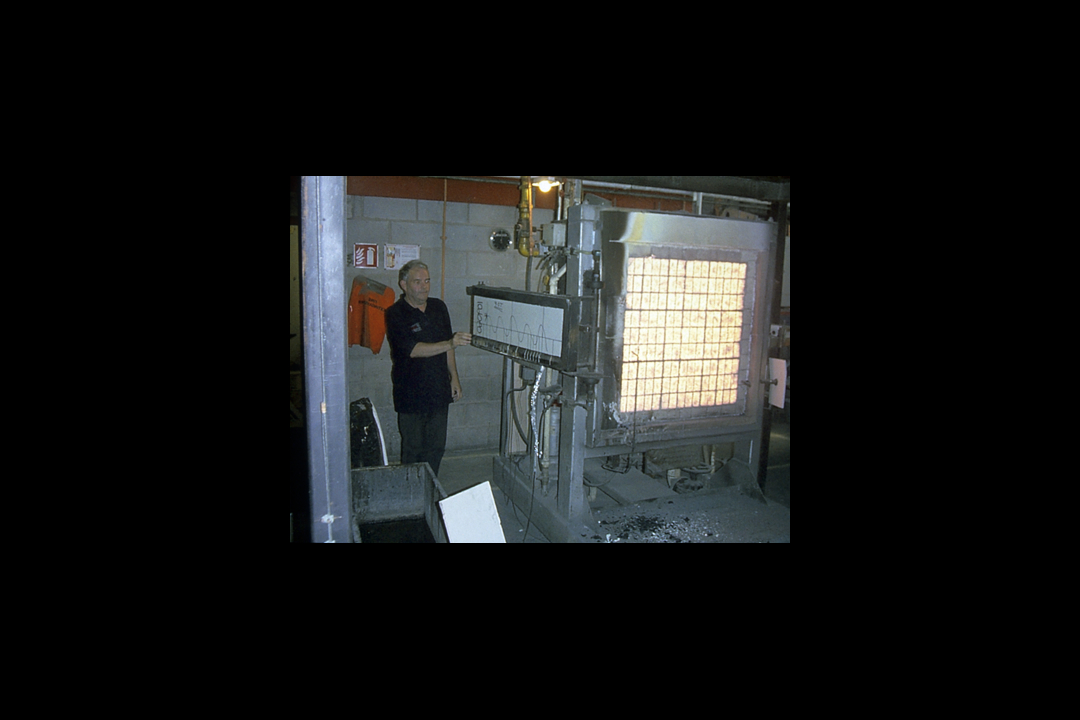 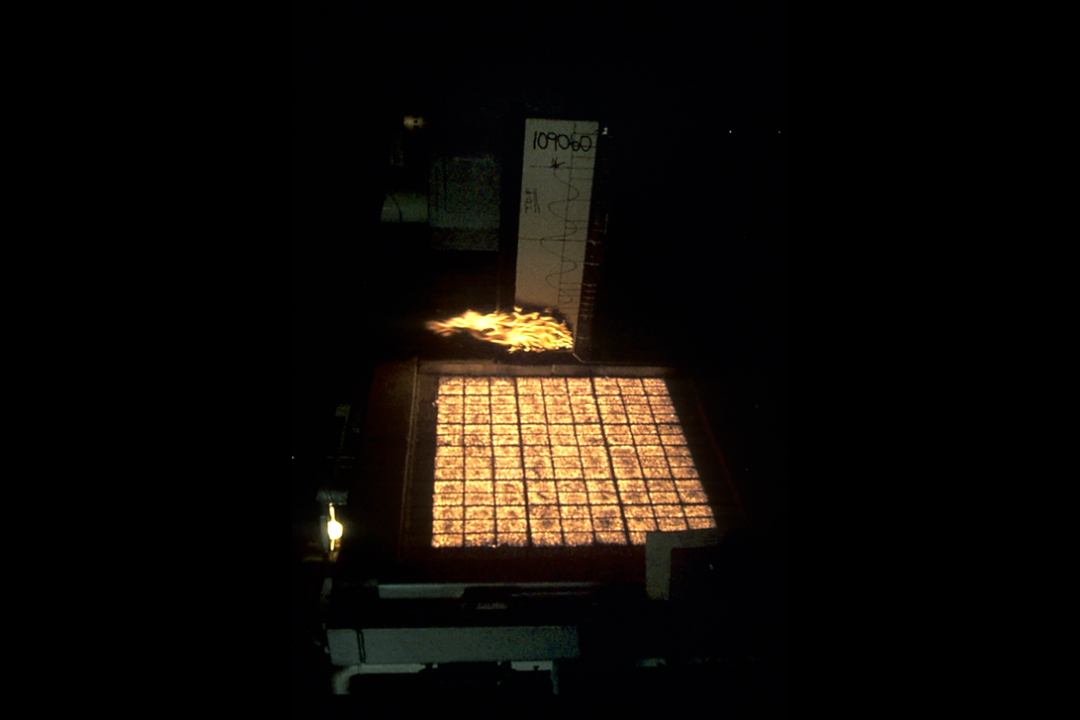 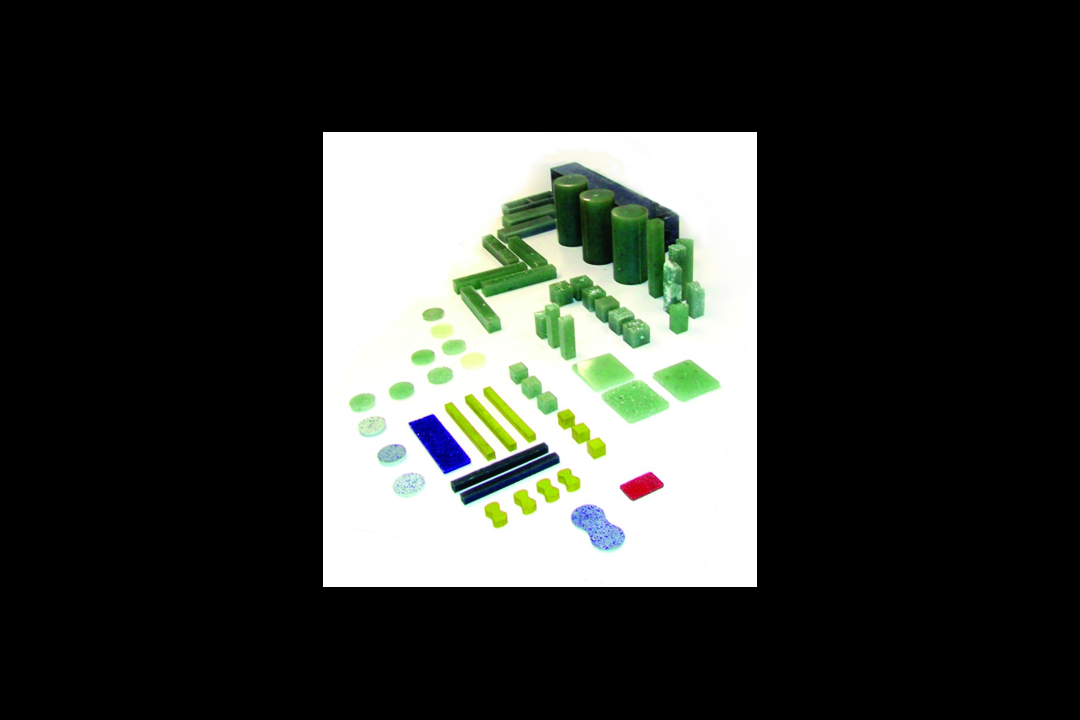 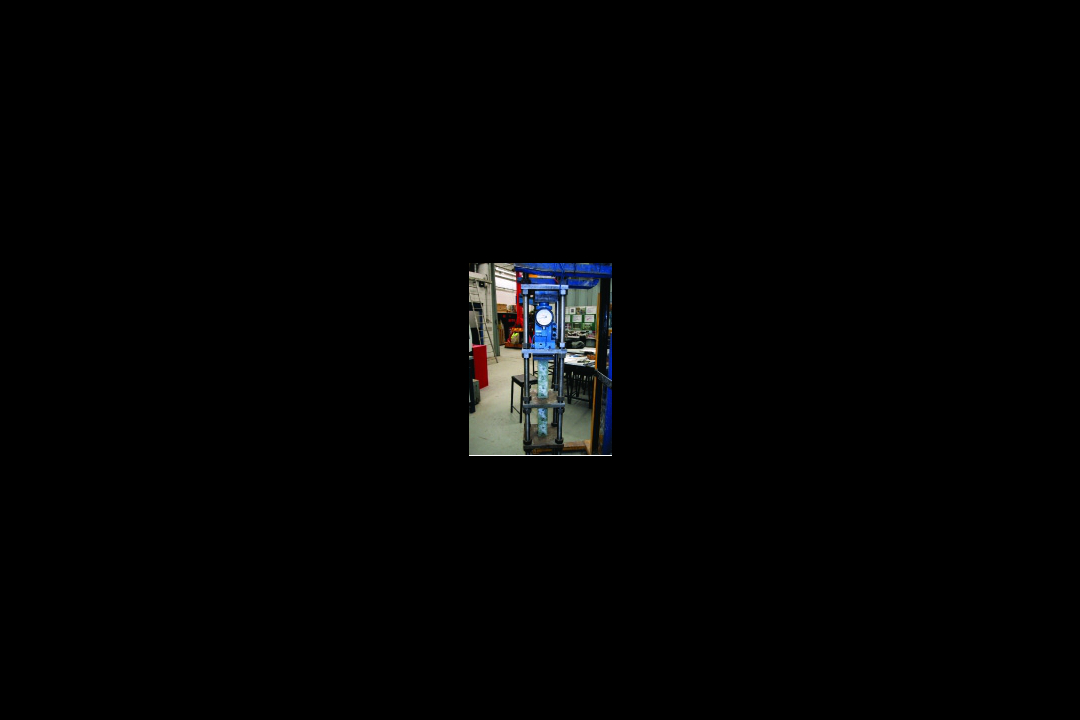