The work is an enquiry into whether two strangers suffering past family trauma – a Romanian woman in search of a child that was forcibly taken from her and a Scottish musician confronting the death of his abusive father – can discover a shared empathy to help heal their pain.

The initial research for this work was facilitated by the wide dissemination of Heath’s film ‘My Dangerous Loverboy’ about sexual exploitation which was adopted by COMBAT, an EU Anti-Trafficking Campaign. This enabled access to research into the way Romanian pimps take the babies of exploited girls who fall pregnant, put them in orphanages, and some are adopted by prospective parents from the UK. 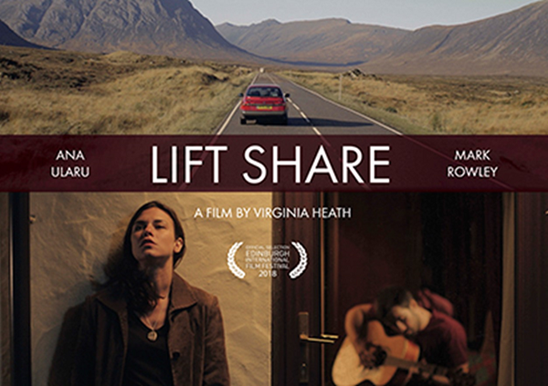 A narrative script was then workshopped with actors in an iterative process to find an emotional and visual language to express a story about both sexual exploitation and familial abuse. The methodology developed in Heath’s film ‘Relativity’ – the use of differing narrative perspectives and the relativity of truth - underpins and frames the realisation of Lift Share.

The characters affect each other across two cinematic time frames and landscapes – their shared present time journey and their imagined future projections of what might transpire when they reach a common destination. Their inner compulsions, demons and dreams are subtly revealed in this liminal space, opening up the possibility of transcending the past.